For the location of dirt jumps, you use pretty much the same concept as general trails (read 1.1), except with a few differences. You’ll want the dirt jumps on a flat, or preferably, slightly downhill slope, so pumping to the end is easier. You’ll also probably want some form of a roll-in to save a hard pedal-in too but that’s optional. Mud is also quite an important factor, read 6.1 for a mud guide. Also, you really want to keep in hidden and away from where people might find it. Also, if the trees around the jumps tend to drop a lot of pine needles or leaves or whatever, you might not want to build under them unless you like sweeping them up, however trees do provide us with nice shade in summer, so its a trade off. Also, being by a water supply such as a river or lake helps because you can collect water from there to use on the jumps.

For dirt jumping it’s less personal preference tools-wise, but you can do all the work with a simple spade, so all other tools just make life easier. In priority order:

That’s about it, remember you can use what you want, or any additional tools if need be.

Get some insirpation by scanning the web for killer sweet dirt jumps. Or just check out these sweet pics I found: 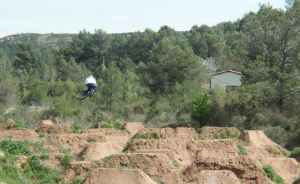 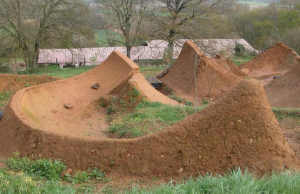 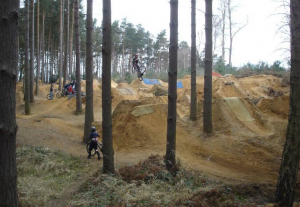 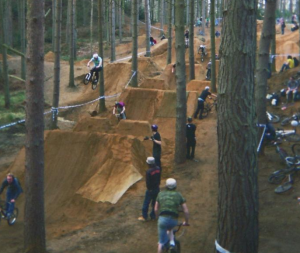 Now you have some motivation, round up your mates (threaten them if need be with beatings and stuff) so you have someone to help dig, as it’ll be quicker that way. Also, scope out the spot you’ll be building at prior to this. Round up ya tools and your bikes and head off.

Once you’re there, do initial clearing everywhere in planned jumps vicinity (see 2.2), then, once you visualized where you be building the jumps, do secondary clearing anywhere you’ll be digging into the ground.

First of all you need to understand the shape of a dirt jump and the connecting pits. To do this, analyze pictures of some quality jumps to get the idea. Then, start off by digging up the dirt from in front of the first lip, to make the first pit, and pile up the dirt where the lip will be. Then, do the same for the landing ramp, starting the pit that’ll connect the first and second jump. Then, skip on the the shaping stage, or you can get the basic shape of the rest of the jumps at this stage too. You can for example work with ya mates building jumps simultaneously. If you need more dirt to get the lips high or wider, widen the pit, or use the dirt from the drainage (5.6) holes. Don’t just keep on digging down otherwise the trannies will be too abrupt. If you dig deeper, you’d have to make the gap between the jumps bigger.

Once the dirt is in the general shape of the jump, you’ll need to ‘whack it in’, compress it. Ideally you should wet the jumps at this stage, but you can always wet them later and re-compress, but it’s best the wet before you whack it in. Now, use your rake, or spade to spread the dirt around so its all smooth and looks like a jump. To whack it in, hit it with a spade as hard as you can, and keep whacking until its all smooth and even. Make sure to whack in the sides and back too otherwise it’ll fall apart.

I have heard of another way to whack them in, which is to put carpet over the dirt then hit to carpet, but my way works too, just try both and see which you like.

Remember, shaping lips is an art, so get as much practice and so can, and ride a lot so you know what the ‘perfect’ lip should be like. If in doubt, do it, then get an experienced jumper to tell you where you went right and/or wrong.

Also, very important tip here, if the jumps are wet (they probably will be after ya finished building them cause you wet them), do not ride them, you’ll leave big ruts it them. Leave for a couple of days (or until next weekend), so they go real hard. Don’t be impatient, you just wreck them (I know it’s hard to wait once ya finally finished but be patient).

Now, drainage is something you should consider because you even start digging, there are a few different ways to do this, so have at look at these various examples to see what ya options are.

It doesn’t take rocket science to build them, water goes downhill, use that nice easy to remember fact and you’ll be fine. Also, try not to build in the bottom of a water basin otherwise you get more to deal with than you aught to be dealing with.

Maintenance is one of, if not the, most important part of building the jumps, without it, the jumps will deteriorate and fall apart, and all that effort has gone to waste.

You start off by getting feedback from ya mates and other riders to see if they like the general shape and flow. If not, fix that first by rebuilding or reshaping anything if necessary. This is often overlooked unfortunately, and some jumps are only then ridden by a few because they are so hard, or too sketchy. So, get feedback to make sure ya jumps are good for everyone.

Then, fix up any damaged stuff now. Don’t just fix, fix the problem not the result of the problem, but if it is just someone being a dick or an accident just repair.

Then, sort out any other problems such as cracked lips, ruts, puddles, general crap all over jumps such as leaves and stuff, by using your common sense. Also, clean up any litter as it wrecks the general atmosphere and gets the jumps destroyed.

Remember, if at all possible, get creative and don’t just build a basic row of jumps, mix it up, throw in berms, hips, step-ups, step-downs, whoops, etc.. Be creative and come up with the craziest things around.

Here’s a few pics to get you inspired:

A VERY IMPORTANT TIP, don’t bring your girlfriend along to help dig, she’ll just dump your ass, bring her riding, but NOT digging.